This was another £2 boot sale purchase. The seller told me it was working perfectly. He lied. *

The first problem was the absence of a battery. This takes a rechargeable “bubble gum stick” battery. Fortunately already have a Walkman and a Mini-disc which use these, so one was to hand.

As expected, the belts were slack. This takes the thin belts common in high end portable cassette players, two of them. I expected this, so had ordered the replacements in advance. What I didn’t anticipate was the belts being encased behind the circuit board. You can see here where I had to de-solder several components. 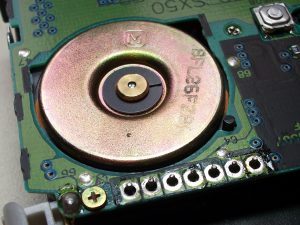 Then the solenoid and cassette detector switches.

Removing a few screws releases the board which can be folded back to reveal the belts to replace. I also cleaned up and re greased the accessible parts of the mechanism before carefully re assembling .

While not quite as nice as the high end Sony’s, this is a very capable and great sounding machine. Recommended.

* Avoid being lied to at boot sales by not asking questions.