Vinyl after dark denied because my Mission Cyrus amplifier has no headphone output. I need something to connect to the tape out RCA sockets. I considered DIY, but it would have cost as much as a bought one to make anything that looked half decent. Research showed that a valve amp could be had for the same price as a solid state one. So, for about £30, I got me this.

The valves seem to do something, because there is a delay at start up before you hear anything, presumably while the valves heat up. Also, when you tap them you can hear it. They are microphonic. Not so great. 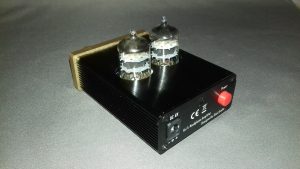 I took the valves out, powered it up and had a poke about with a volt meter. Found +12v, -12v and +6v. Obviously some sort of voltage multiplying going on inside the box. In here we have 24V available to the designer for the valve stage. Also, a nice split power supply for the op amps.

A quick google revealed plenty of real life examples of using standard valves in circuits powered by just 12V. I found guitar effects pedals and Hi Fi pre-amplifiers. So Clearly it is possible to do this.

Slow start up, dead without valves and microphonic behaviour. I could waste hours of my life reverse engineering the thing and working out exactly how it works. I won’t though. I’ve seen enough to convince me the valves here actually do the business. Oh, and somebody else did it and posted their experience on YouTube.

Something which kept cropping up in my research was how poor the supplied valves are in these cheap amps. I managed to source some “New old stock” British made Mullard E180F valves. A massive improvement to the already good sound was evident straight away and the microphonic behaviour was gone.

Fed from the Goldring E3 cartridge on the Dual 505 via the Cyrus One MM pre-amp and feeding a pair of AKG Y50 cans, it sounds pretty good and looks the part. All in all, a good result.